The office of  the Carolina League announced Monday their All Stars teams and six Wilmington Blue Rocks made the Northern Division All-Star team.

The six Blue Rocks were Shortstop Nicky Lopez , outfielder Anderson Miller and pitchers Foster Griffin, Cristian Castillo, Richard Lovelady, and Yunior Marte.  With six players getting an All-Star nod, it became the most Rocks sent to the All-Star game since 2011, when they sent five.

The All-Star game will be played at Hayley Toyota Field in Salem, Virginia on June 20th, 2017. The best of the Northern Division of the Carolina League will play the Southern Division for bragging rights in the league.

Lets look at the six Rocks All stars:

Griffin came back this season with a vengeance, after struggling last season. Griffin posted a 4-2 record with the Rocks and was their most dominant pitcher on the mound for April and May.  Griffin had an 2.86 ERA in 10 starts with fanning 60 batters that sent him up to Royals AA affiliate Northwest Arkansas Naturals on May 29th. Griffin was also the opening day starter for the Rocks this season.

Here’s what Blue Rocks manager Jamie Quirk said about Griffin getting the honor:

“It’s a big step for him. He struggled here last year to be honest. He struggled with command and confidence. I think the biggest thing for Griffin was that we gave him the Opening Day start. He took it and said I’m the guy. I think that gave him confidence, made him think they believe in me and he has been great ever since,” Quirk said on the former ace for the Rocks. 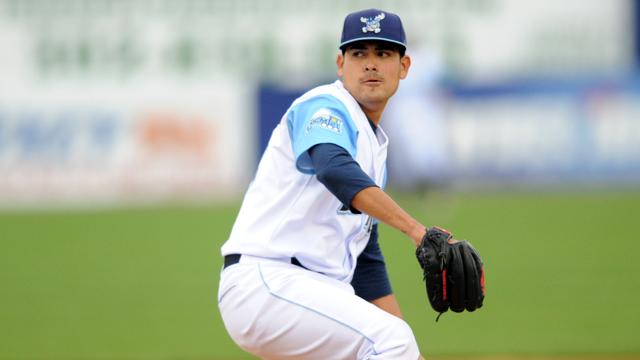 The other starting Rocks pitcher that got an All-Star nod was Christian Castillo who was shutting down hitters in the month of May. Castillo had a 3-1 record, 31 strikeouts, 1.96 ERA and gave up 10 runs in the month of May. Overall on the season, Castillo is 3-3 with a Carolina League ninth best ERA of 3.13. Castillo is no rookie at getting honors, as he earned the Dominican Summer League and Appalachian League Pitcher of the Year Awards in 2015 and 2016.

Here’s what Blue Rocks manager Jamie Quirk said about Castillo getting the honor:

“It’s outstanding that Castillo made it. He’s the fifth starter in the rotation because he was picked fifth to try and split the left handers when we had three lefties in the rotation to start the year. It was no reflection of his ability. He just goes about his business. He doesn’t light up the radar gun or wow anybody, but he does have a quality fastball, a great breaking ball, a great change up,” Quirk praised.

The Blue Rocks Bullpen has kept the Rocks in many games this season and it is no surprise to see two relief pitchers getting a nod. The first reliever is Richard Lovelady who in May who had 3 saves, 1 run, 1 ER, 14 strikeouts and an ERA of 0.85. Overall on the season, Lovelady has 30 strikeouts, 5 saves and 1.44 ERA.

Here’s what Blue Rocks manager Jamie Quirk said about Lovelady getting the honor:

“He has been dominant. The knock on Lovelady was if he was able to compose himself to consistently throw strikes. This year, that has never been an issue. He trusts his fastball, mixes in a little breaking ball and changeup and he just continues to pound the strike zone,” Quirk said. “I don’t want to say he surprised anybody because everyone knows what his stuff is. It was a matter of being able to contain it and use it in the zone and he has done that.”

The other reliever is Yunior Marte who been a tough opponent for batters all season long with an 1.95 ERA on the mound.  Marte has 36 strikeouts on the season and has hitters hitting the fifth lowest batting average in the Carolina League with .187. Marte is tied second on the team with four saves.

Here’s what Blue Rocks manager Jamie Quirk said about Marte getting the honor:

“Marte is a high-leverage, high-energy pitcher with a plus fastball and a plus breaking ball. He’s not afraid to use his breaking ball at any time,” Quirk said regarding Marte’s pitching arsenal. Everybody thinks he’s just going to pound the zone with his 95 m.p.h. fastball, but he can throw his curveball whenever he wants. He’s a guy with high expectations in the Royals’ organization. I don’t want to say he put himself on the map because everybody in our organization knew about him, but he’s taken it to another level.”

Now we head to the Rocks All-Stars on Offense and first up is the fast rising Shortstop Nicky Lopez. The 22 year old Shortstop has been on fire offensively in the first two months of the season with being in the top ten of every offense category including batting average, at-bats, hits, triples and on-base percentage. In 59 games, Lopez has a .314 batting average, 38 runs scored and 13 stolen bases on the season.

Here’s what Blue Rocks manager Jamie Quirk said about Lopez getting the honor:

“He’s a good baseball player,” Blue Rocks manager Jamie Quirk said. “He does well with everything. Offensively, defensively, he’s a prototypical lead-off hitter. I don’t think it matters that it’s his first full year or that he is in High-A. He can play and when you can play, it shows. Anything he does on the field doesn’t surprise me.”

The second year Blue Rock did not start the season out too well with a .188 batting average in April but that all changed in May. In May, Miller had a 30 game on base streak that started April 14th and then ended the 15th of May. The streak is the longest of year in the Carolina League and fourth longest in three seasons. Miller’s streak is the second longest in Rocks history only to Eric Hosmer who had 33 in 2010. Miller has been versatile in the outfield this season playing all three positions. Overall on the season, Miller has 7 home runs, 14 stolen bases, 31 walks and has scored 30 runs.

Here’s what Blue Rocks manager Jamie Quirk said about Miller getting the honor:

“He’s been outstanding considering his April was really poor. I didn’t think we would be having this conversation in April, but in May he tuned up his game,” Quirk said on the returning outfielder. He drove in runs, he got some power going and he’s a guy that can play all three outfield positions. He hit in the three hole almost all year and he has taken his game to another level and he definitely deserves to be on the team.”